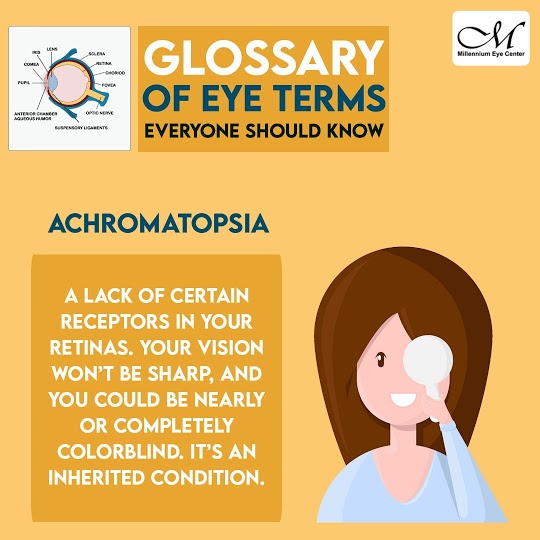 Achromatopsia is a condition characterized by a lack of certain receptors in your retinas. This condition reduces your vision sharpeness, and you could be nearly or completely color blind.

Complete achromatopsia occurs frequently among Pingelapese islanders, who live on one of the Eastern Caroline Islands of Micronesia. Between 4 and 10 percent of people in this population have a total absence of color vision.

According to Medlineplus.gov, Achromatopsia results from changes in one of several genes: CNGA3, CNGB3, GNAT2, PDE6C, or PDE6H. A particular CNGB3 gene mutation underlies the condition in Pingelapese islanders.

Achromatopsia is a disorder of the retina, which is the light-sensitive tissue at the back of the eye. The retina contains two types of light receptor cells, called rods and cones. These cells transmit visual signals from the eye to the brain through a process called phototransduction. Rods provide vision in low light (night vision). Cones provide vision in bright light (daylight vision), including color vision.

Mutations in any of the genes listed above prevent cones from reacting appropriately to light, which interferes with phototransduction. In people with complete achromatopsia, cones are nonfunctional, and vision depends entirely on the activity of rods. The loss of cone function leads to a total lack of color vision and causes the other vision problems. People with incomplete achromatopsia retain some cone function. These individuals have limited color vision, and their other vision problems tend to be less severe.

Some people with achromatopsia do not have identified mutations in any of the known genes. In these individuals, the cause of the disorder is unknown. Other genetic factors that have not been identified likely contribute to this condition.

Our top priority is your lifelong healthy vision!